Selenium is an umbrella open-source project for a range of tools and libraries that enable and support the automation of web browser testing. It’s a suite of three products, Selenium IDE, Selenium Grid, and Selenium WebDriver.

It provides extensions to emulate user interaction with browsers, a distribution server for scaling browser allocation, and the infrastructure for the W3C WebDriver specification that lets you write interchangeable code for all major web browsers. We will focus on its use to perform Tableau dashboard testing rather than its typical deployment to test the GUI of webpages.

What Is Selenium IDE?

Within the Selenium Tableau testing solution, most people start by utilizing Selenium IDE first. As its name implies, IDE (Integrated Development Environment) is the tool you use to develop your Selenium test cases exploiting a Chrome, Firefox, and Edge extension for recording the user’s interactions with the browser.

After the Selenium IDE browser extension has been started and the test URL entered, a new URL window opens. User interactions are recorded for future replay. 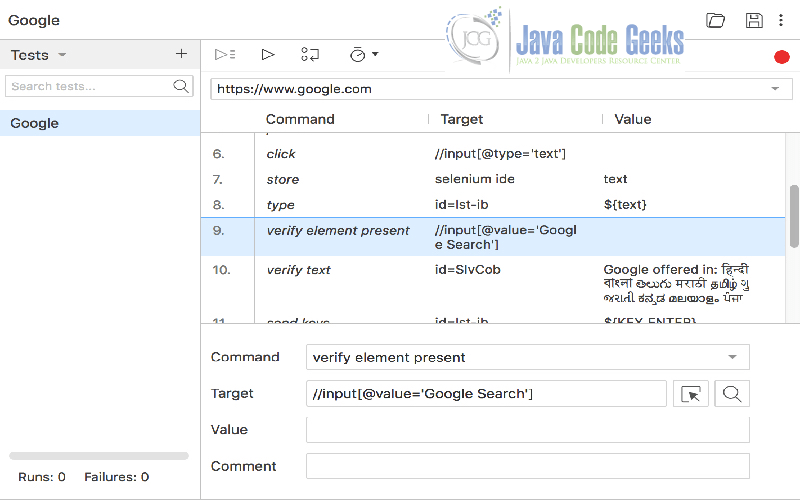 After recording, the test Commands, Targets, Values, and Comments can either be modified or replayed as is. A robust set of Commands are available to create more complex test scenarios: 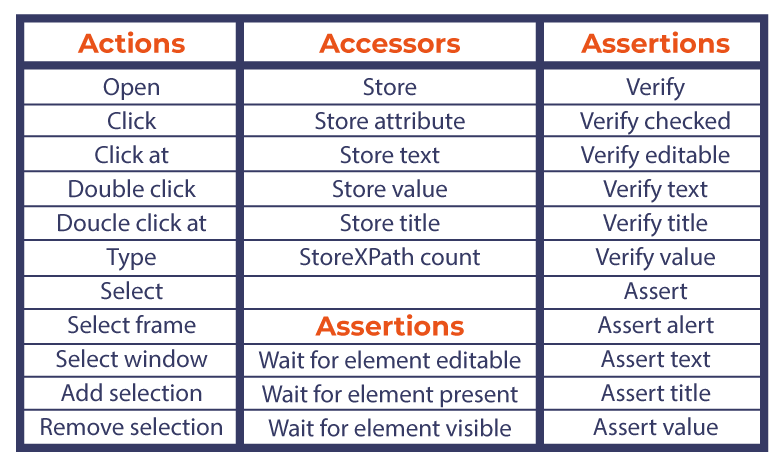 This list is less complex when you realize that Verify automatically checks and logs an error, and Assert checks and stops the test after each error. The resulting tests produce text logs indicating whether there are any issues:

Selenium IDE produces tests based on the webpage’s layout and the user recorded interaction, which is ideal for testing GUI-based webpages. The ability to integrate with higher-level Tableau logic, like a project directory tree and data values, is limited. Each step of Tableau item selection needs to be reproduced a step at a time.

The Tableau regression test includes eleven optional tests simplifying the whole process – no coding is required. It results in a very graphical and easy-to-understand report:

And clear A/B visuals of any issues: 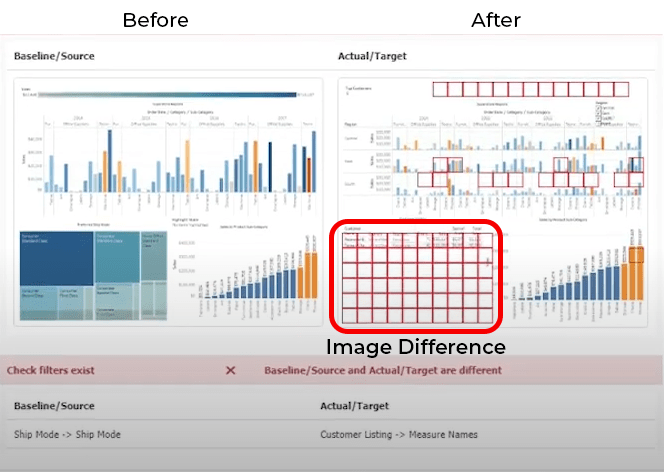 Understanding Selenium Grid At A Glance

Testing from your client’s computer environment has severe limits on the scale and environmental characteristics of the tests. To test differing operating system environments needs VMs or discrete servers for each of them. The Selenium Grid operates from a single node to hundreds or thousands of nodes supporting diverse user browser/device testing scenarios and large-scale load testing. The test JSON files are executed either locally or remotely in an appropriate environment at the required scale, large, in most cases. 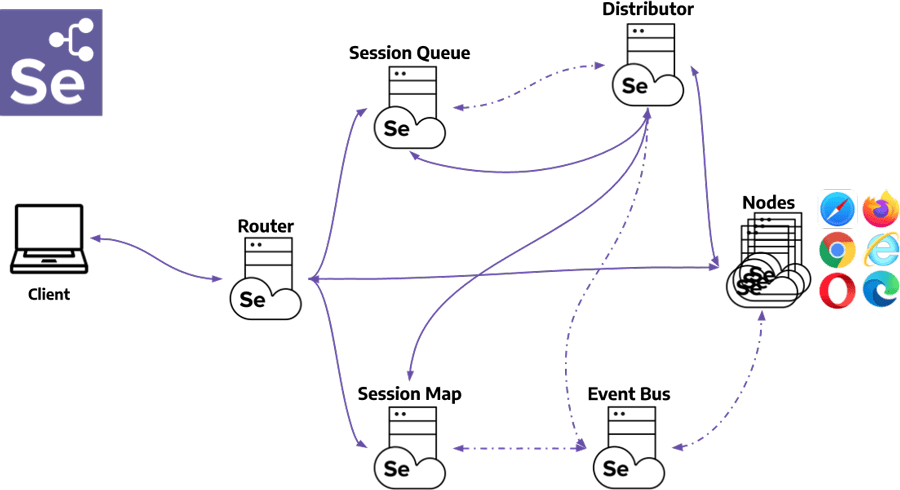 Depending upon your scale, you can use the Selenium Grid in Standalone, Hub/Node, Distributed, or Docker modes. Each includes all of the above components integrated appropriately to provide easy execution for any deployment. Standalone Grids run all of their components on the same server. Hub/Nodes Grids, with their nodes separated, work well for medium-sized deployments. Distributed Grids frequently have all of their components on different servers to maximize performance.

Today numerous people ask why it’s necessary to test on so many browsers when many of them are now based on the Chromium open-source project and are pretty much identical, except for their GUI style? The emerging best practice is heavy testing on Chrome and smoke testing of Edge and other browsers.

The compute clouds are a popular ecosystem to operate Selenium Grids in. Providing that the Grids don’t operate continuously at their full capacity for more than half the time, the computing clouds are less expensive than owning the hardware.

The Selenium Tableau testing solution has many Grid testing ecosystem partners with all kinds of browsers, operating systems, and mobile devices, an easy way to get mobile device testing done expeditiously. However, since they are mostly off-shore, there are potential compliance issues for many companies testing their data analytics. Many types of financial, customer, and medical data now need to remain in-country or continent.

Wiiisdom Ops isn’t a cloud solution, but it can execute in the computing clouds. Wiiisdom Performance Testing not only loads the Tableau ecosystem but also identifies the potential root causes of any issues. 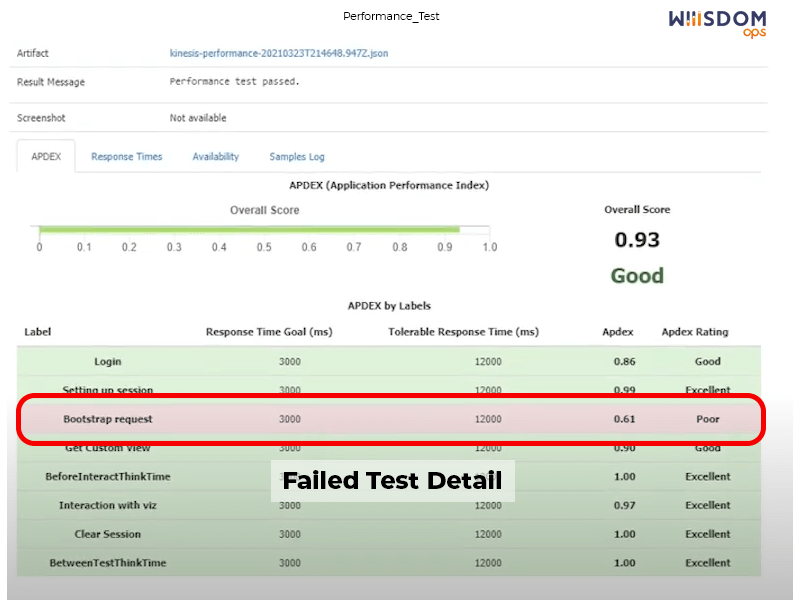 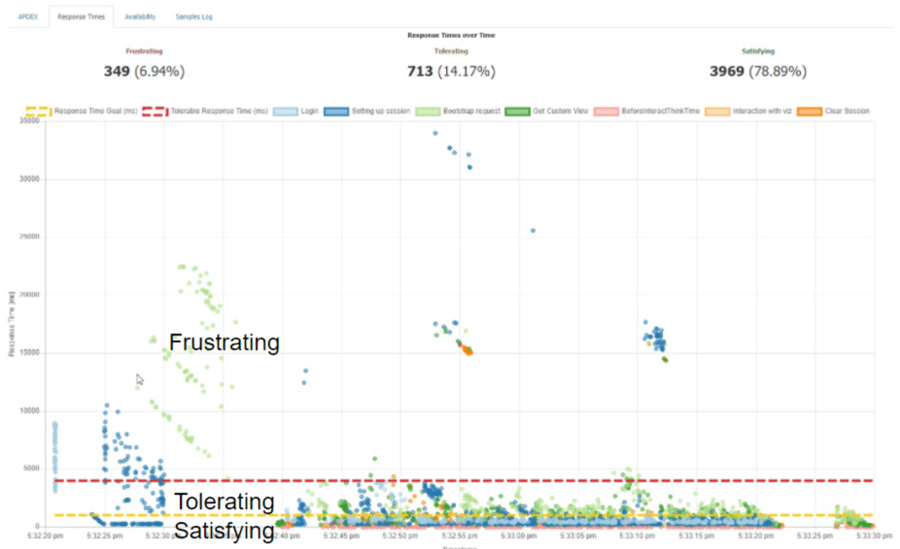 What Is The Function Of Selenium Webdriver?

Postage stamp summary of Selenium 4 is:

All in all, not a drag and drop analytics GUI test tool. A typical Java test to move the mouse to the middle of a display window element would look like this:

Selenium Webdriver Tableau test development needs two prerequisite skills, the ability to program in one of the many supported languages and to navigate the Tableau test application browser GUI object indexing.

In contrast, setting a Tableau filter to a min of 10 and a max of 30 in Wiiisdom Ops utilizes a simple dialog box with search navigation for the specific worksheet and filter names – no programming experience is necessary. Almost anyone can do this Wiiisdom Ops Tableau test creation.

Will It Be Wiiisdom Ops Or Selenium For Your Tableau Testing?

It’s rumored that Selenium takes about 3-times the effort of Wiiisdom Ops to generate Tableau tests. An important factor if you’re working with many dashboards. 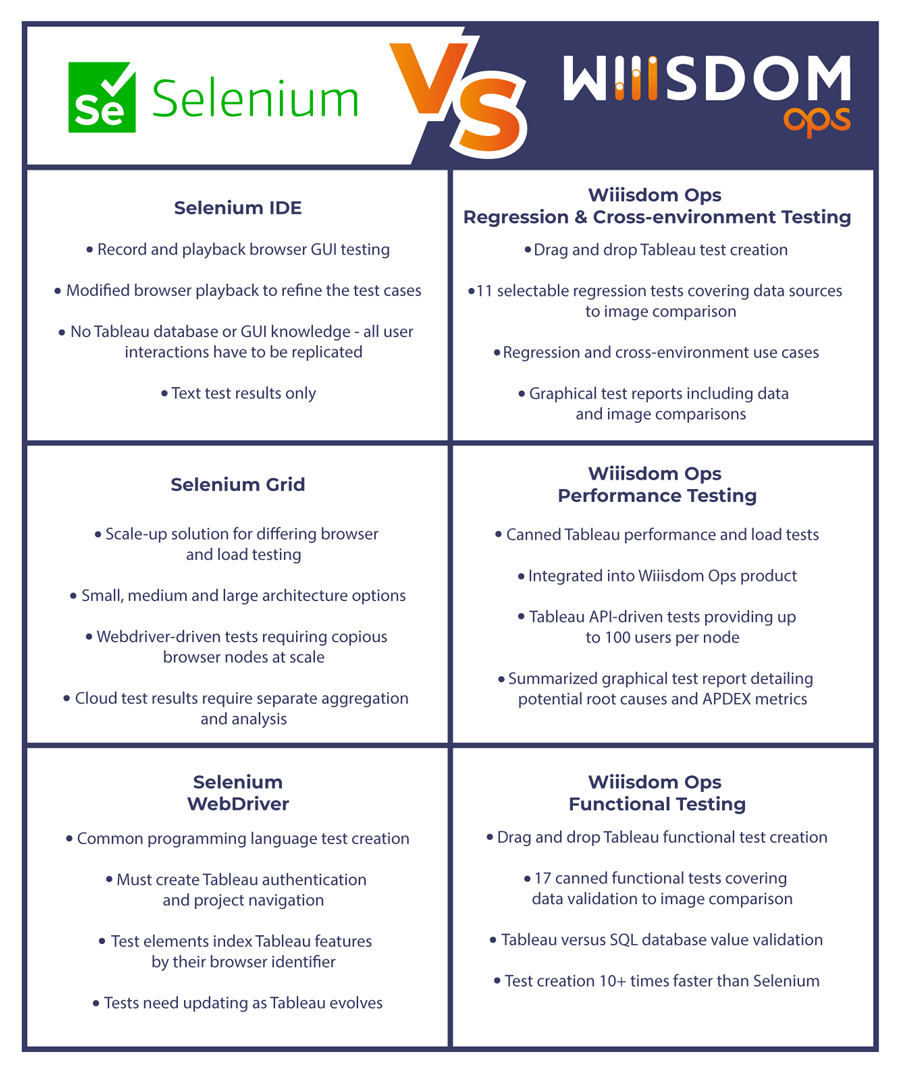 Bob Fletcher / About Author
Bob, Sales Director for the United States at Wiiisdom. He creates and manages successful partnerships and achieving customer satisfaction for the Tableau community.
More posts by Bob Fletcher